Home  /  Opinion   /  From the UK: A Restorative Blueprint for Justice
Opinion, Public Policy
by RJI Staff

From the UK: A Restorative Blueprint for Justice 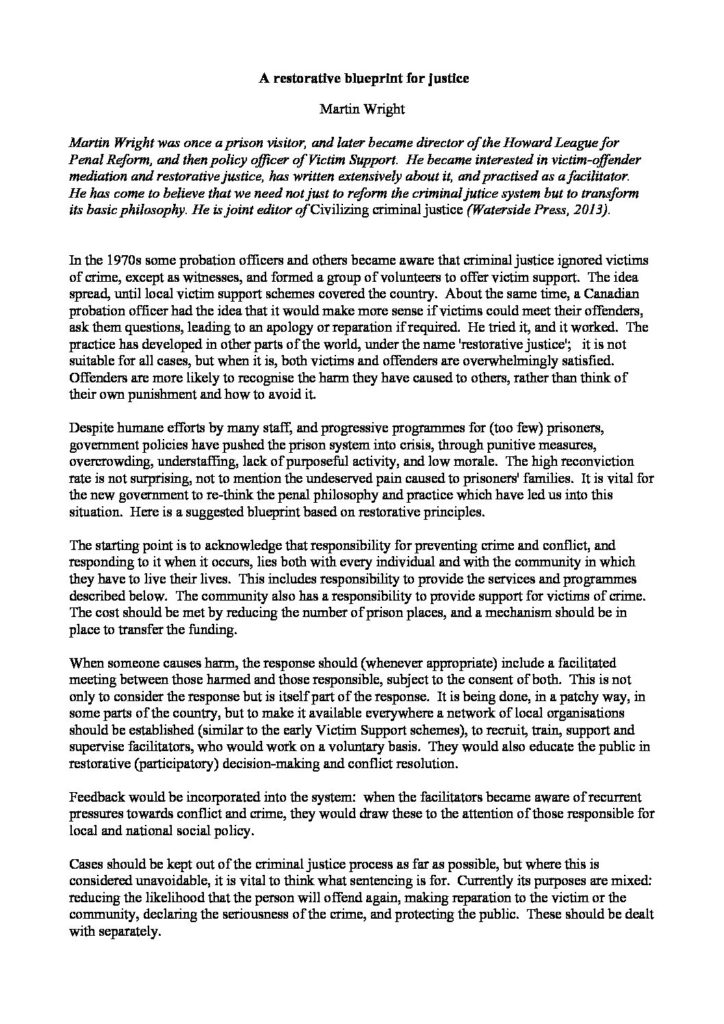 
A restorative blueprint for justice

Martin Wright was once a prison visitor, and later became director of the Howard League for Penal Reform, and then policy officer of Victim Support.  He became interested in victim-offender mediation and restorative justice, has written extensively about it, and practised as a facilitator.  He has come to believe that we need not just to reform the criminal jutice system but to transform its basic philosophy. He is joint editor of Civilizing criminal justice (Waterside Press, 2013).
In the 1970s some probation officers and others became aware that criminal justice ignored victims of crime, except as witnesses, and formed a group of volunteers to offer victim support.  The idea spread, until local victim support schemes covered the country.  About the same time, a Canadian probation officer had the idea that it would make more sense if victims could meet their offenders, ask them questions, leading to an apology or reparation if required.  He tried it, and it worked.  The practice has developed in other parts of the world, under the name ‘restorative justice’;   it is not suitable for all cases, but when it is, both victims and offenders are overwhelmingly satisfied.  Offenders are more likely to recognise the harm they have caused to others, rather than think of their own punishment and how to avoid it.
Despite humane efforts by many staff, and progressive programmes for (too few) prisoners, government policies have pushed the prison system into crisis, through punitive measures, overcrowding, understaffing, lack of purposeful activity, and low morale.  The high reconviction rate is not surprising, not to mention the undeserved pain caused to prisoners’ families.  It is vital for the new government to re-think the penal philosophy and practice which have led us into this situation.  Here is a suggested blueprint based on restorative principles.
The starting point is to acknowledge that responsibility for preventing crime and conflict, and responding to it when it occurs, lies both with every individual and with the community in which they have to live their lives.  This includes responsibility to provide the services and programmes described below.  The community also has a responsibility to provide support for victims of crime.  The cost should be met by reducing the number of prison places, and a mechanism should be in place to transfer the funding.
When someone causes harm, the response should (whenever appropriate) include a facilitated meeting between those harmed and those responsible, subject to the consent of both.  This is not only to consider the response but is itself part of the response.  It is being done, in a patchy way, in some parts of the country, but to make it available everywhere a network of local organisations should be established (similar to the early Victim Support schemes), to recruit, train, support and supervise facilitators, who would work on a voluntary basis.  They would also educate the public in restorative (participatory) decision-making and conflict resolution.
Feedback would be incorporated into the system:  when the facilitators became aware of recurrent pressures towards conflict and crime, they would draw these to the attention of those responsible for local and national social policy.
Cases should be kept out of the criminal justice process as far as possible, but where this is considered unavoidable, it is vital to think what sentencing is for.  Currently its purposes are mixed:  reducing the likelihood that the person will offend again, making reparation to the victim or the community, declaring the seriousness of the crime, and protecting the public.  These should be dealt with separately.
(1 )      The primary purpose of sentencing would be to require the offender to undergo a programme to make them aware of why their action was wrong, and make them less likely to repeat it, for example:  for road traffic offences, a course on driving and road safety;  for addiction, therapy; for violence, anger management; for lack of work skills, education and training; for financial misconduct, a course of business ethics.
(2 )      In addition they should make reparation to the victim and/or the community, including co-operation with a programme such as the above.
(3 )      The seriousness of the offence would be marked by the period of time for which the offender must be kept under supervision, fulfilling the above requirements and reporting regularly, by means of a community order (for less serious offences) or a suspended prison sentence (for the more serious).  The period would be comparable to a ‘Richter scale’, proportionate to the seriousness, but could be longer than the time required to fulfil the requirements.
(4 )      The prison sentence would only be enforced where there was a serious risk that the person would commit further serious offences or abscond,  otherwise the above requirements would be met in community facilities or special day centres. In prison, the regime would enable the primary and secondary purposes (above) to be carried out and provide, for those who need it, a place of hope and transformation, preparing them for acceptance into society.
For serious offenders when a prison sentence was unavoidable, one way of making reparation would be to co-operate with research into the origins of their behaviour (such as sexual abuse, violent extremism, or financial wrongdoing by the already-wealthy) with a view to feedback into preventive policies (see above).
These measures do involve restriction of liberty, but their purpose is not punishment for its own sake.  They do not aim to ‘work’ by causing fear, but by encouraging remorse at the harm caused, and the self-esteem that will enable the wrongdoer to make amends.
Insofar as criminal justice aims to deter people from offending, the deterrence lies in the probability of being caught.  The focus of policies to reduce crime will not lie with criminal justice but with physical measures such as locks, alarms, PIN numbers and supervision, and with creating a culture in which there are higher expectations of law-abiding behaviour and fewer pressures towards crime.
6.5.2015