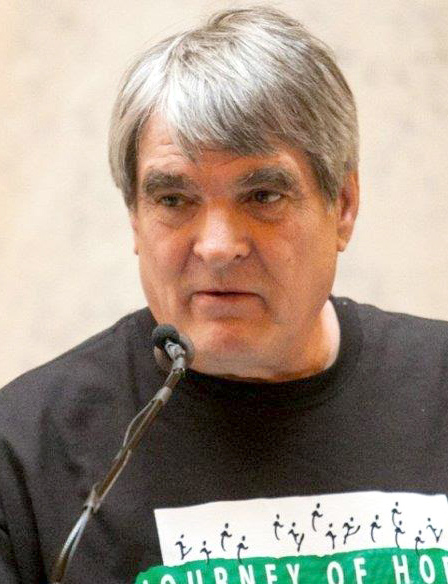 A Tribute to Bill Pelke

My friend and colleague Bill Pelke died unexpectedly of a massive heart attack on November 12, 2020 while shoveling snow at his home in Alaska. Getting the news of Bill’s passing has shocked all of us who called him friend and worked with him for so many years laboring for justice. It is a great and deep loss. Bill’s focused mission was to end the death penalty in the U.S. and he took that goal world-wide as he spoke out as a witness like none other in recent times.

Bill was a victim of violent crime whose 78-year old grandmother, Ruth Pelke, was brutally murdered in Gary, Indiana in 1985 by a group of juvenile girls led by a 15-year old named Paula Cooper. During an attempted home robbery Cooper stabbed Ruth Pelke 33 times. Bill Pelke at first wanted to see Cooper die supporting the death penalty but he later emphatically reversed that position and became a champion against its use.

Through Bill’s leadership the nonprofit organized murder victims’ family members and gave them a platform to speak out against the death penalty. Many of those victims spoke of forgiveness, as did Bill, stating passionately that the death penalty provided no healing to them. Many spoke of their support for restorative justice including Bill.

Bill and I first connected when I was lobbying for Justice Fellowship (JF) in California in the late 1990s.  JF was a national nonprofit advocating for criminal justice reform based on restorative justice principles. I learned of Bill’s story either in print or via someone in my own network. But it was clear I needed to know this individual. He told the story of how he first wanted Paula Cooper to get the death sentence for savagely killing his grandmother, Nana. But after he prayed to God to give him compassion for Cooper his prayer was answered. He forgave Cooper, retired as a steelworker at Bethlehem Steel and worked to reverse her death sentence. In time he corresponded with Cooper and then met her in prison. Bill was there for Cooper when she was released from prison after serving 28 years stating that his wish was to see Cooper “restored.” He was committed to seeing that happen. And in my own work in the field of restorative justice I learned from watching Bill’s life.

Bill’s gift was his ability to bring together an incredible network of people and build a diverse coalition working for justice reform. The special appeal of being a part of the Journey of Hope was in meeting others working for justice and joining an effort seeking to create a better and more just criminal justice system. Bill united people by giving them a platform to meet and speak across the country wherever they were asked or planting the seeds for opportunities to speak in any venue. I was encouraged to attend a Journey event and did so joining them in Texas and in Washington, D.C. I first resisted Bill’s invitations to join a Journey event feeling I was not a good fit as a speaker on the death penalty. I was an advocate for restorative justice. But Bill urged me to come. It was always hard to say no to Bill—he persisted. He said he would give me time to speak about restorative justice and its intersection with the death penalty. But as I participated in these Journey events it was far less about speaking about restorative justice and more about meeting the people Bill knew and hearing their stories. So often those stories were violent and horrendous or steeped in injustice. Yet sometimes the stories provided hope or a opened a new way forward to understand how much further we had to go to heal our broken justice systems.

At these Journey gatherings I met a group of exonerated men—some of them served prison time on death row while innocent of their crimes. This was my first encounter meeting individuals who were wrongful convicted. I met Greg Wilhoit who served time on Oklahoma’s death row as an innocent man. Greg was convicted and sentenced to death for killing his wife. The only evidence–junk science: teeth marks supposedly matching Greg’s on his wife’s back. Meeting Greg and becoming his friend and meeting other exonerees affected my work deeply by showing the clear connection between restorative justice and wrongful convictions. And in Greg’s case—the death penalty itself. I met so many incredible people including the great champion for justice Sister Helen Prejean, crime victims like State Representative Renny Cushing (New Hampshire), Jennifer Bishop-Jenkins (Illinois), Marietta Jaeger (Montana), and family members like Terri Steinberg (Virginia) with loved ones in prison for crimes they did not commit. Each with stories to tell—each on a different, individual journey of their own. Not all these individuals had the same story as Bill’s, his story of forgiveness, but each passionately opposed the death penalty and were committed to changing our justice system through their personal witness.

Bill lived out his faith daily and worked for justice until his passing travelling by plane to Indiana this year, during covid-19, to oppose federal executions which just this year were  resumed under the Trump administration on federal death row. He was a powerful witness for restorative justice and the fruit that forgiveness brings.

We worked together so often and in so many ways over 20 years. When speaking about the victims of violent crime who support restorative justice it is rare for me not to mention Bill Pelke’s story. And I will continue to do so. He and I spoke via email on November 4 agreeing to stand firm and pray for this nation–that Biden would be elected and that there would be a peaceful transfer of power in our nation.

Always his first goal was to end the death penalty in America but Bill’s God given call went beyond that as he lived out his faith fully every day without fear pledged to going wherever God led and wherever a door opened. I am grateful to have known Bill. May we work to be like Bill Pelke as we seek justice and healing which this world needs so much today.  The Journey of Hope’s work continues.