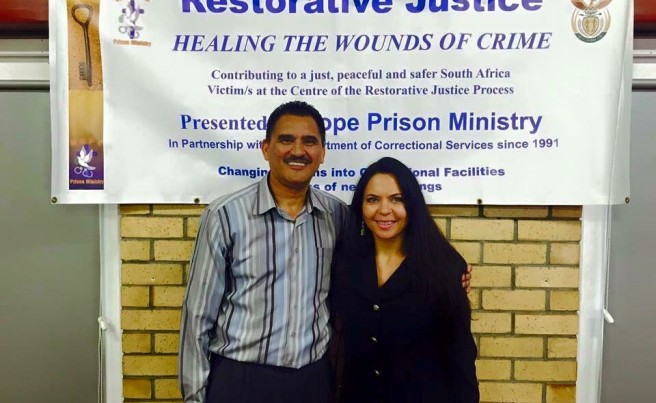 The following article is an interview* with victim of violent crime Jennifer Chatburn of Cape Town, South Africa published in Finesse magazine (January 2015) as written by Cinde Greyling. The article was translated from Afrikaans into English for RJI.  We thank Ms. Chatburn for her efforts and her advocacy for restorative justice. RJI is honored to tell her story.

It is through crime victims like Jennifer Chatburn that our justice systems are moving towards systemic reform based on restorative justice principles.

The truth sets you free

Jennifer Chatburn is familiar with the internal battle caused by regret and unanswered questions. Murder never leaves a pleasant mark. Although she did not get the answers she sought, she helps others to do so.

It is a strange sight. The beautiful woman sitting across the convict in his orange overall. Earlier, she addressed the entire group. But this man, with his shaven head and tattoo in his neck, wishes to talk to her alone. Her message left an uneasy feeling in his chest. He was not keen to attend this “whitey’s” talk. Every Tom, Dick and Harry with a degree or two thinks that they can convert jailbirds…

Although she only truly got to know him after she left school, Jennifer has fond memories of her father, Graham. “He worked long, hard hours at the railways to provide us with whatever we needed,” she remembers. “Sadly, the shiny netball and pretty shoes he bought, is long gone.” She also recalls him as being a fun loving father, though. “Whenever he was home, we had loads of fun. And train-holidays were the best! We’d travel from town to town, experiencing the richest of adventures. Today, I deeply treasure those memories.

Due to long periods of absence, Jennifer’s parents became strangers to one another. She was in her final school year when they got divorced. “On my birthday! My heart was shattered. Till this day, I believe they were meant for one another, although they were never truly happy together. Maybe, if they had time to work through their issues…” But life carries on, and after school Jen and her dad became flatmates. “One of my responsibilities was to cook – but do you know how many take-away slips I found in my dad’s pockets?! He never had the heart to complain about my cooking… I still cannot cook!”

Graham had a hard time dealing with the divorce, and the day he returned to their flat with a smile on his face, was bittersweet. “Of course I was happy that he felt better,” Jennifer says. “Lost in love! Unfortunately, I did not approve of his new sweetheart. For some reason, I simply couldn’t get to like Louise. But then again, my dad was pretty sceptic about my boyfriend too!” After some time, her dad and Louise wed, and Jennifer got married too.

“My dad’s marriage to Louise did not last very long, but she succeeded in convincing him to marry her a second time! I was dumbfounded. I was so relieved when they divorced… Did he really have to marry her again?” A couple of months later, Jennifer and her dad

spoke over the phone one Saturday evening. “He missed us and was so happy to hear my voice… and then I picked a fight with him.” Only much later did Jennifer learn her father was busy sorting the pictures of their last Christmas holiday together when she phoned.

“It was a horrible conversation. I went off because my dad didn’t support my brother financially – at that stage, my husband and I looked after him. The more my dad tried to explain, the more upset I became. Why was he giving all his money to Louise? I wanted to know. Frustrated, I burst into tears and slammed down the phone in his ears. And that was the last time I spoke to him.”

Later that evening, when Jennifer’s husband found her in tears, he suggested that she should phone her dad and make peace. “But it was after twelve already, I did not want to wake him…” The next day, Graham disappeared. He was so upset after his fight with his daughter that he went for a walk, Louise claimed. He wanted to clear his head.

What happened after that, was talked about the “crossbow murder” countrywide. This mystery was dissected by each new paper. But to this day, Jennifer still don’t have the answers that she has been looking for since 15 February 1992. What she does know, is that Louise planned her father’s death to the T. After the second wedding, she took out substantial life cover for Graham, bought a crossbow, and waited for the perfect time. And what can be better than an argument with his beloved daughter. The chances of anyone ever finding Graham’s body in the Liesbeekriver, was slim. While he was sleeping, Louise shot him through the head with a crossbow, and dumped him in the river. But then his body was found…

“During those two days before they found my dad’s body, I went through hell. And once they found him, through an inferno. I was overcome by remorse. I was the one who picked the fight, then slammed the phone down in his ear… and that is how we parted. Forever. It took me a while to realise that Louise carefully orchestrated the entire event. She wouldn’t let anyone stand in her way. If I never had words with my dad, she would have simply used another opportunity. There is nothing that I can change about the last conversation between my father and me. It happened. The only thing I want to know, is why she did it? What was the reason?”

Jennifer slipped into a deep, dark depression. “Then I realised Louise did not only kill my dad, but that she was killing my soul. And I was not going to let her. I was never going to give her that much power.” To start with, Jennifer went for therapy. “That was quite something. During those years therapy was still much frowned upon… especially if you were a Christian. Back then, I was also involved in ministering. Why would I need therapy? The Lord will make it better, won’t he? Yes, he will. But in the right way. I needed to look my pain in the eye. I had to talk about it.”

As time passed, Jenifer did get some peace, but the big question remained: Why? She was still working as a hairdresser when one of her clients convinced her to go and study. “I’ve always wanted to, but I never thought it would be possible… Well, turns out it was possible after all! Nervous about my leap of faith, I found myself on campus as a first year at the beginning of 2000. That is how my journey with criminology started.” Jennifer

thought that she would find the answer in books and theories. She obtained her first degree. Then an honours degree, and finally a master’s degree.

“The first day in the phycology class, I remember the lecturer saying: ‘If you are here to solve your own problems, you are making a mistake.’ And he was right! The more I learned, the less I knew. Until I came across restorative justice. It’s a programme that allows loved ones of the victim to meet the perpetrator.” Jennifer had an intense desire to follow the programme that would allow her to go and visit Louise in jail. She wanted to look in her eyes and ask: Why? Jen also wanted to know more about the crime. She wanted to see the police photos, know the detail. Anything to take away the question mark in her life.

“Of course it is upsetting, but I also realised that the pictures in my head was a thousand times worse that the reality. It is better to be confronted with the hard evidence. Unfortunately, Louise still failed to explain why… Just like years before in court, she blamed everybody else.”

Although Jen still sits with her big question mark, it was worth it all. “I became involved with a restorative justice programme. I tell my story to the inmates. Every little detail. I show them the picture of my dad like I knew him, followed by a photo of what Louise left for us to find. It’s not pretty, but it is real. Perpetrators seldom realise what the victim’s family is confronted with… they are often shocked by this reality. Then I motivate them to talk to the victim’s family, because they are the only people with the answers. It is not written in ‘n book somewhere. To know, will not undo the crime. But the healing process is so much easier if the questions are less. The truth sets the perpetrators and the people they hurt, free.”

That is how Jennifer became part of Jonathan Clayton’s restorative justice programme. It was a long road to finally get where she is sitting across the inmate in his orange overall today. But hopefully she left a trail that others will follow. The gruesome photo of her father’s body is nog longer a symbol of pain, but rather one of hope. And no, she will probably never be able to significantly improve crime in South-Africa. But if the truth can lighten the load of one person, that will be enough. Be it a perpetrator or a victim’s loved one – it doesn’t matter. “There are many broken, searching people on this planet. We are the only ones who can help one another – with the truth.”

This is a wonderful article that brings hope to family and friends of homicide victims. I am a member of the Albany Diocese Restorative Justice Commission, Albany,NY,USA.
Two of our members were able to have a victim-offender dialogue with the offender. Although, it can return the victim, it does offer release for those so deeply affected by the loss.

Thank you for your comment, Connie. We hear from so many victims of violent crime that restorative justice helps them to heal, on some level. We need to do all that we can do to expand the use of restorative justice to not only crime victims but their offenders as well.