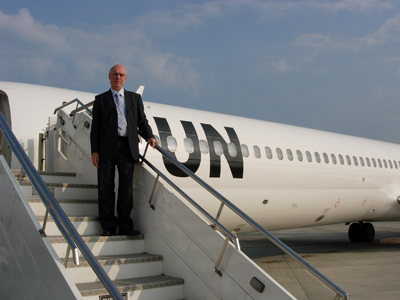 RJI is fortunate to have Dr. Sandro Calvani serving on our Global Steering Committee. He writes the following commentary on the Bangkok bombing on August 17th, 2015 from his office in Bangkok, Thailand.

The terror of every bomb and the horror of unjust justice

The first man who, having fenced in a piece of land, said ‘This is mine’,

and found people naïve enough to believe him, that man was the true founder of civil society.

From how many crimes, wars, and murders,

from how many horrors and misfortunes might not any one have saved mankind,

and shouting to his fellows: Beware of listening to this impostor;

you are undone if you once forget that the fruits of the earth belong to us all,

and the earth itself to nobody.

On 17 August 2015 at 7:00 pm a criminal idiot exploded a bomb in front of the Erawan Hindu and Buddhist Shrine in downtown Bangkok. The attack against innocent bystanders caused the death of at least twenty people and badly injured more than 140 others including Thai worshippers, taxi-drivers and many Chinese tourists. It became the worst event of massive violence ever recorded in a country that is well known for its peaceful, smiling and happy culture. A very young colleague of mine was badly injured.

Several members of the press immediately labeled the attack as a terrorist act: they might be right, if we consider the terror caused in a town of twelve million inhabitants who live happily together – along with millions of visitors – usually with almost no security risk. Two days after the blast, the Thai police investigation is looking in every direction but it is still not clear what kind of mentally sick ideology inspired the bomber. However, the unique and very special location of the blast, as well as the professionally prepared explosive device might suggest some form of revenge attack.

The personal profile of the bomber could be that of somebody seeking to “take justice into his own hands” in order to aggrieve some perceived abuse of his own rights by committing an act of blind and blunt uncontrolled violence. It could be an umpteenth case of explosive “might against right”, instigated by some macroscopic bullying policy, venting its spleen against an unprepared group of innocent people. This niche of mad violence and of violent crime is not studied enough in our globalized societies, usually turned more towards the better understanding of human rights practices and policies and to ensuring the humane treatment of offenders of sometimes heinous crimes.

Indeed the world lives in an illusion that the modern system of rule of law, governed by nations and their governments, provides enough hope for desperate people. It does not. Double standards of international right policies are numerous. The UNPO (Unrepresented Nations and Peoples Organization) has, since more than twenty-five years, denounced the macroscopic abuse of international rights against more than a hundred unrecognized peoples and nations. Therefore, for every San Marino who joins the United Nations, or a Kosovo recognized by European nations, another hundred peoples see their rights abused every day, with the shocking silence of tolerant religions, the 193 Member Governments of the United Nations, and even Nobel Peace prize winners – all of whom choose silence.

For example, the Thai authorities recently repatriated a group of 109 Uighur asylum seekers to China, despite the fact that they lived in Thailand longer than a year, a flagrant violation of international law, according to a statement by the United Nations. Families were separated: men were sent to China, women and children to Turkey. They were treated as an unwanted parcel rejected back to the sender. In a similar manner, other minorities, like the Rohingya people from the Rakhine state in Myanmar, feel very badly treated in various parts of South-East Asia, including repeated cases of violence instigated by Buddhist monks in Myanmar. Millions of inspired quotations by Confucius, Pope Francis, John Kennedy, Nelson Mandela, Buddha and the Holy Coran flood our social networks every day, creating an illusion of global convergence and conversion towards peace, tolerance, justice and solidarity. However, at the same time, competition, inequality, heavy bullying and “might over right” behaviour continue to rule the real day-to-day life of civil societies, governments and the private sector.

It is a forgotten lesson of history that crushing the hopes of hundreds of thousands of innocent and often uneducated young people usually engenders a few mad rebels who turn to and execute bloody acts of revenge. Nevertheless, for centuries and in so many countries, punishing the offenders with life imprisonment or death penalty is the most common response of the national rule of law. In rare cases, some consideration was given to listening for a moment to their plea for the hope of a dignified future for their people; applying some form of restorative justice could rebuild a humane relation between the criminals and the victims. Furthermore, because of middle-age kinds of punitive justice, the victims rarely find an understanding and a closure for the heinous crimes that destroyed their families and their lives. A vicious cycle of violent mad revenge perpetrates terrorism and repression in too many parts of the world.

In my UN career, I have met with rejected young asylum seekers who became violent; I have talked with desperately poor farmers who were re-born as bomber terrorists and narco-traffickers. In so many of these cases, I found that they firmly believed that they were victims before they became offenders. Their graphic descriptions of having been submitted to inhumane humiliations and shameful human rights abuses appeared to me to be both sincere and intellectually honest. Taking justice in their own hands was in all cases totally wrong, but at the same time it was the only illusion of justice they could conceive. Since they were all un-educated people, they certainly had never read Rousseau’s books.

I can only conclude – 260 years after Rousseau alerted humankind on the collateral damages of unjust justice – that our educated leaders serving in government, in parliaments and in justice systems of “constitutional” nations should consider alternative and smarter tools to effectively break the vicious circles of inhumane and mad violence that we have created in our so-called “modern” globalized societies.

[1] Retired UN diplomat, member of the Global Steering Committee of Restorative Justice International. His opinion does not necessarily represent those of international institutions where he has worked in the past thirty-five years in 135 nations. www.sandrocalvani.it