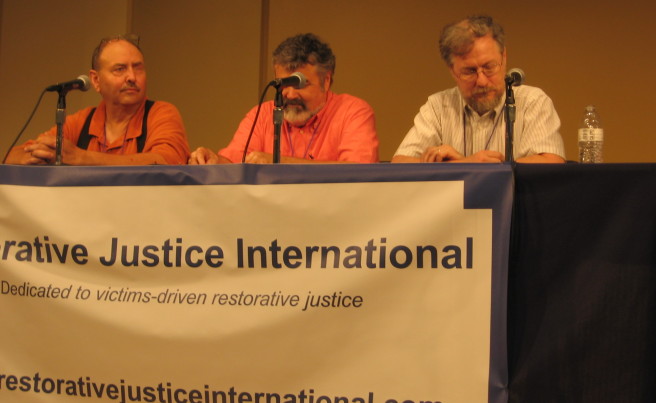 What a conference we had at Wheaton College, Illinois on May 29-30, 2014 at the Correctional Ministries and Chaplains Association annual conference. RJI presented two events: one a victim’s panel with victims of violent crime who support victims-driven restorative justice and support the mission of RJI.  We also presented a workshop on victims-driven restorative justice with additional victims telling their stories of why restorative justice makes a difference. The victims who spoke were Wyoming Representative Stephen Watt, Cheryl Ward Kaiser (California), Jeanne Bishop (Illinois), Russ Turner (California) and Bill Jenkins (Illinois). Each story told was unique, each story different. RJI was honored to have each of these victims/survivors appear with us. Each victim’s story is one of healing coming out of great pain and injury.  No cut and dried stories here where each victim is alike. That is never true, but each has found a way to a place of some kind of peace. All support restorative justice and testify that it helped give them a “voice” in the justice system and allowed them to find their voices.

I have learned over the years that you never know nor can you predict where a victim’s life will head after experiencing violent crime. You also do not know what will happen to victims of violent crime after they have chosen to participate in restorative justice. You think the story is over but the next time you hear that victim speak more has transpired—often more healing. Just one example is Cheryl Ward-Kaiser.  Cheryl’s husband was murdered and her daughter raped before her eyes during a home invasion in 1991. Cheryl has met with all her offenders—at the time of the crime they were juveniles. I had not heard until this year that Cheryl had now met the man who raped her daughter. That meeting between this offender and Cheryl occurred in prison and lasted six long hours.  Cheryl talked about how valuable this meeting was to her and also to the offender. That was new and again showed me that restorative justice can be experienced long after the crime has occurred if the victim, first, is willing and the offender is willing and takes responsibility for his actions. Though Cheryl this year turned 70 years old her journey has taken her down a very long and unexpected path. And it continues. There has been great healing for Cheryl because of restorative justice and for the offenders she’s met there has been accountability. There’s no nonsense with Cheryl. You would never call her “soft” on crime. She is far from it. Cheryl is one of the best advocates for restorative justice I’ve ever met. But each victim who spoke at our events testify to the powerful impact that restorative justice has had on their lives in unexpected ways.

As with any conference there are moments when you meet people who perhaps you will never see again but the encounter is important.  Since it was a national correctional ministry and chaplain association conference our part of the conference was different. Restorative justice was not the focus of the conference, nor was it intended to be. But I know from the feedback we received that many were affected by the stories of the victims who shared about their lives and the impact restorative justice has had on them and their offenders. One woman stopped me in the hallway at Wheaton College and could barely speak about it. She grabbed my hand and thanked me in a passionate manner. I think she was surprised—maybe astonished—that victims of violent crime could meet their offenders leading them to a place of healing or some kind of peace. I did not get a chance to talk to this woman as she rushed off down the hallway. I realize that those that hear victims tell their stories and make their case for restorative justice—some of them telling how they have forgiven their offenders—are seen as not normal or at least in the minority. But that is not so.  More and more victims across the United States and worldwide are choosing restorative justice for themselves. Once they do they want to tell their stories and add their voices to those in support of restorative justice. Each story and each life injured by violent crime is different, of course. Not all forgive their offenders nor does restorative justice require this or expect it. Sometimes victims and offenders are reconciled with each other but not always. Through restorative justice processes some kind of change has occurred and it is good for both the victim and the offender.

I know what this message brings to so many. It brings hope. So many injured by the justice system whether they are victims of crime and their families, or offenders, ex-offenders, and their families all are drawn to the message that restorative justice provides. There is hope for more and greater healing than they have ever known.  How powerful that is.

As I often state in my own speeches the work we do as advocates for victims-driven restorative justice is a call to action. We are not merely story tellers. The call to action requires our justice system in the U.S., and around the world, to change. It requires a paradigm shift as Howard Zehr stated years ago in his excellent book Changing Lenses.  We must turn from how we currently process crime, and process people. We need a new way to respond to crime and violence in society. We need to invest now in restorative justice.  RJI believes restorative justice should be a “right” for all victims of crime.  By making it a right the doors will open widely for restorative justice for victims to choose to participate in it on whatever level they choose for themselves.  When victims choose to participate in restorative justice significant transformation will occur in the offender. However, as RJI states it is not just about the offender it’s about the victim and bringing a higher level of satisfaction to those most injured by crime.