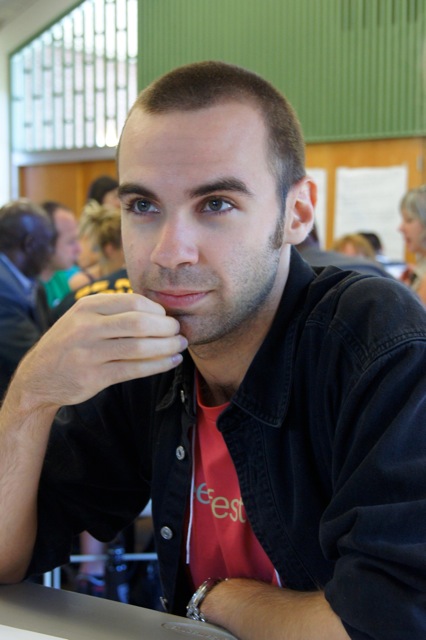 The following is a column written by Matthew Johnson. Johnson is a social justice activist and restorative justice practitioner from the Washington, D.C. area.

For the longest time I could not speak about Michael Brown, Eric Garner, John Crawford III, Akai Gurley, or any of the many black men who have been slain by police in recent months. I was caught between rage and powerlessness: Is it the right time to talk about solutions when so many are in pain? Is there any way to satisfy the extremes on both sides, where violence is the chosen response? These were two questions I struggled with as a peace activist and restorative justice practitioner — and as a white man.

It is undeniable that white people can and do suffer police violence, but they are typically not profiled due to race. Their skin color alone does not raise suspicion — although there is a class dimension that is worth noting. Would the NYPD have placed Garner in a fatal chokehold if he had been selling looseys in a suit and tie? I have never heard of such an incident, but there is no way to know for sure.

What I do know is that there is something deeply wrong in this country, and I am not referring to a few bad police or misguided laws but a system infested with institutional racism and hair-trigger violence. Blacks are so brazenly dehumanized and in need of progressive re-branding campaigns like #blacklivesmatter because the United States has not evolved beyond its several-hundred-year history of racial oppression. At times cops in certain segregated communities seem to function as a less crude, better equipped, and more organized version of the slave breakers of the 19th century. How else can we explain their overreaction to demonstrations in Ferguson and elsewhere and policies like Stop and Frisk that seem to only target people of color, whether they are law abiding or not? The slave breaker mentality was in full force in the powerful film, Fruitvale Station, which documented the tragic murder of 22-year-old Oscar Grant by a white cop in 2008. To debate whether one particular cop is racist or if policing techniques are intentionally discriminatory is to miss the point.

Racism is not just about spouting epithets and wearing black face, it’s about incarcerating blacks at such disproportionate rates that even apartheid South Africa would blush. It’s about discriminatory housing polices forcing blacks into blighted inner cities and away from white neighborhoods. It’s about keeping blacks from holding decent jobs, owning land, or accessing higher education. It’s about holding a deep-seated fear of black men and justifying it based on lies, distortions, and stereotypes. And, yes, it’s about murdering them and getting away with it — whether you are George Zimmerman, Darren Wilson, or Roy Bryant.

But even the history and reality of institutional racism is not enough to explain the extreme violence used by police in situations where words or inaction may have sufficed. The lack of basic conflict resolution skills exhibited by police in those cases is appalling. Is this evidence of a deficit in training, competence, decency, or a combination of the three? I have not yet decided, although I will say that — as a trained mediator — while decency cannot so easily be taught, training in areas that people take for granted as intuitive is essential. At a minimum, before an officer is ever taught to use a gun, he should be taught to use his common sense.

In an ideal world he would not need a gun at all to defuse potentially violent situations. The organization Cure Violence, which views violence as the public health pandemic that it is and treats it through nonviolence, is representative of this ideal, and the proposal that standout police officers be trained as violence interrupters within their own units is the best solution I have heard thus far. If protesters can police themselves, albeit imperfectly, why can’t the police? Even if some departments were willing to submit to such reforms voluntarily, federal involvement is necessary given the power of police unions and the conservatism of local police not only in small, southern towns but also in ‘liberal’ cities like Portland.

The question that remains, though, is what to do when there is another instance of police brutality that threatens to tear apart yet another community — or even the whole country? I am so bold as to offer dialogue as the solution, which I know will disappoint both the revolutionaries and reactionaries alike. It does not require teargas, armored personnel carriers, or military-style assault weapons — nor does it require the blocking of traffic, the destruction of property, or the looting of businesses. It proved to be transformative for the police and concerned citizens of Seattle when John T. Williams, a First Nations woodcarver, was needlessly shot down in 2010. While, as is almost always the case, the officer was not convicted for the killing, the restorative justice process used allowed for healing, understanding, and other forms of accountability that benefited not only those close to the matter but also the community as a whole. No process can raise the dead or erase a history of oppression, but a victim-centered restorative approach — which focuses on harms, needs, and obligations instead of crimes, laws, and punishments — costs no additional lives and very little in financial terms while building a more equitable future.

This approach may not sound glamorous or lend itself to TV news in the way that a violent protest and the ensuing police crackdown do, but it requires more courage, creativity, and perseverance than both. I can only hope that this large, diverse, and divided community known as the United States can come to the table.

You can find more from Matthew at http://writingonthewall275.wordpress.com/